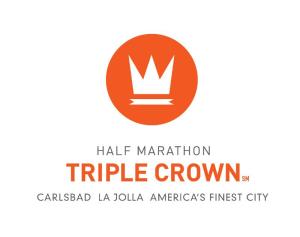 No I don’t mean that I am going to start racing horses and take on the Kentucky Durby. Although not as prestigious as Secretariat’s 1973 win the Belmont Stakes, on Sunday I will be awarded with the San Diego Triple Crown medal for completing three designated San Diego half marathons within one year. This year I ran the Carlsbad Half Marathon, the La Jolla Half Marathon and on Sunday I will run the America’s Finest City Half Marathon. Each race is unique and has their own benefits and downsides. I have actually raced Carlsbad twice now (it was my first half marathon) and this will be my second time completing AFC.

The Carlsbad Half Marathon boasts one of the flattest courses in the West. Located in North San Diego County at the end of January, this event draws a lot of beginners. The Expo is very large and is held at the start and finish line which also happens to be a mall parking lot. Parking for this event isn’t bad, especially if you take El Camino rather than the freeway like we did. There are plenty of bathrooms (believe me this is a perk) and the course serves Gu and post-race snacks for free in addition to water and sports drink on the course.

Personally, I enjoy this course and although it is mostly flat, there are some rolling hills to keep things interesting. Although the start is a couple of miles inland, most of the route is along the scenic Southern California coastline. It’s an out and back course, which does allow for a nice confident booster as you watch the thousands of competitors that are behind you on the way back. Another perk of this course is there are pacers. The 2nd time I raced this course I was trying to break 2 hours for the first time and I’m not sure I would have made it without the man with the 2:00 sign.

I trained for this event with my VAVI Running Club and ran primarily with my friends Jen and Miranda that I met in the club. Mike did not train much for this event, although he ended up doing just fine with a low 1:40s finish. I finally broke 2 hours at this race, coming in at 1:59:26. My race report is here.

The La Jolla Half Marathon, by contrast to Carlsbad, is one of the hilliest half marathons on the West Coast. There are four hills, the third of which is Torrey Pines Hill which is part of a State Park known primarily for hiking. The hill is contains a 420 foot ascent over only 2 miles, with the steepest points being about 6.5% grade.

The race starts at the famous Del Mar fairgrounds and finishes in the gorgeous La Jolla Cove. The expo is in La Jolla and is difficult to get to (due to traffic) and is very small. The course itself offers no Gu or pacers but does have a beer garden at the finish. This is undoubtably my favorite of the three races – the course is gorgeous and the hill really tests your endurance and leg strength. Coasting down the backside of the hill is a welcome relief after all the hard work put into the race so far and also provides a beautiful view of the Pacific. The finish line is at the same park that thousands of tourists travel from around the world to see for themselves. I couldn’t have felt luckier to live in San Diego than I did after finishing this race.

Leading up to this race I had just finished 12 weeks of P90X and was in the best shape of my life thus far. I trained on Torrey Pines hill at least 5 times prior to the race and included the hill as part of my 14 mile marathon training run. I ended up dropping 5 1/2 minutes off of my PR at this race, coming in at 1:54:21 (top 10% in my age group!).  Race report here.

America’s Finest City Half Marathon is a one-way course that starts in Point Loma and finishes at gorgeous Balboa Park. The race does not hand out Gu, have pacers or a beer garden, but it is a very popular race due to the scenic course and time of year, as it takes place in August. The worst part about this race is getting to the start. There is limited access to Balboa Park so not only is traffic terrible but once you arrive you must wait in line to take a bus to the start line. You must be in line by 5:30 a.m. or you are not guaranteed a ride to the start (and the start is in military base so you can’t get dropped off). Therefore, to be safe, you should arrive by 5 a.m. With traffic and a typical commute time of 35 minutes from North County, it means we’ll be leaving our house around 4 a.m. and waking up by 3:30 a.m.!!!

America’s Finest City Half Marathon is where I made my come back to running last August. It had been a year and a half since my first and only half marathon at Carlsbad, and I was on a mission to drop 13 minutes off of my time and break 2 hours. Although I knew there was a 2 mile hill at the end of this course, I figured the three miles of downhill (and rolling hills) at the start of the race could give me a leg up in case I lost steam on the final leg. Unfortunately, despite consistently pacing myself at a 9:05 min/mile (a 9:10 is needed to break 2 hours although you must run slightly faster due to the fact that the course is actually longer than 13.1 miles when run), I bonked at the bottom of the hill at mile 10 and ultimately came in just shy of my goal at 2:01:59.

This year in preparation for the race, I haven’t been training for a half marathon – I’ve been training for a triathlon and doing P90X. However, I think that the work I’ve done over the last few months plus the endurance I have from the marathon in June should give me enough speed to at least get close to my La Jolla PR, if not break it. After such a great race at La Jolla I had my sights set on breaking 1:50 at AFC this year but I just haven’t had time to dedicate to training. I’ve been lucky to get two runs in a week, and usually one of those runs is 3 miles or less and is part of a triathlon or aquathon. However, running 10 miles on a whim is no longer hard and nearly seems (dare I say it) easy after running 14-21 miles every weekend for a month and a half in preparation for the Rock n Roll Marathon in May. So I think that despite limited run training recently there could be some (personal) records broken!

Who knows – I was thinking I may not even break 2 hours at La Jolla and I came in well below that. My plan is just to go out at about an 8:15- 8:30 pace for the first few miles of downhill, try to sustain 8:30-40ish on the flats and then battle my way up the hill to a new PR. We’ll see! I might as well try and see what happens!

No matter what happens (well unless we miss the race due to traffic or something), I’ll be a Triple Crown Finisher on Sunday! Then not only will I receive my AFC finisher medal, I’ll also receive a shiny Triple Crown medal to go in the drawer with the rest of them.

March 1: 6 Week Run + Strength Race Training Group- Train for a virtual or in person 5K, 10K or Half Marathon with a professional running plan incorporating Beachbody workouts with a community of runners!!!