On Sunday I ran my 5th half marathon of my life and my 3rd of this year – of organized races, that is. While I trained for the Rock n Roll Marathon, I ran 13.1 miles or more nearly every weekend for two months. Since the marathon, long distance running has a new perspective. For example, a couple of weeks ago I went for a 10 mile run before work. No longer is a 7-10 mile run a “special run” that involves a pasta dinner the night before and is only reserved for Saturday mornings. This is a huge change from my perspective while training for this same race last year.

A lot can change in a year and a ton of progress can be made! Not only did my mental attitude toward long distance running shift, my physical performance improved.  Last year I ran the AFC half marathon in a disappointing 2:01:59, so close to my goal of breaking 2 hours.  Last year I tapered the week before the race and actually only worked out one time in the week leading up to it due to a bruised foot. I carbo-loaded, rested and prayed. The day after the race I was wiped out- exhausted and sore for days.  This year I completed 7 workouts in the six days leading up to the race and finished in a 1:52:24 and was less sore the day after than I was after P90X Legs and Back and previous week. Could it be – half marathons are becoming easy?

Obviously no race is “easy” since by definition a race pushes you to your brink. Admittedly, although my time dropped 2 minutes from my last half marathon in La Jolla, this race was more difficult for me than that one. The final two miles were pretty brutal and my running partner Asia ended up dropping me like I was hot going up the hill and finished 30 seconds ahead of me. I finished La Jolla strong and probably with some reserves left. AFC took every ounce of energy from me. Although there could be several reasons for the change, the feeling that I have is that it has to do with my diet. Prior to the last race I was eating very healthy and following the P90X nutrition plan semi-religiously. This time I was following the nutrition plan haphazardly and not thinking twice about “cheat meals,” which have become a 3 or more time a week occurrence these days. Specifically, my office went to the races on Friday night and I ate a bunch of kettle corn, chips and dip and cookies and then Mike and I had burgers for dinner. Not exactly the best pre-race fuel. In general, I’ve let my healthy eating habits slip due to vacations, weddings, bridal showers, bachelorette parties, BBQs, etc. I’m about 2-3 lbs heavier than I was on race day last time as well.

I’ll spare you the mile by mile details, but I will say that perhaps getting to this race is more difficutl than running it. Since we now live in North County San Diego, we had to wake up at 3:15 a.m. in order to leave our house by 3:45 a.m. to guarantee a spot in line for the buses by 5 a.m. (if you aren’t in line by 5:30 you aren’t racing). A main freeway to the start was closed and we anticipated heavy traffic. However, we ended up taking a side street shortcut and arriving at 4:45. It was still dark even after the 20 minute or so bus ride to the start line.

We got our two bathroom stops in with plenty of time to make our way to the front(ish) of this mass start race. I started the race with Asia and Jen, and we didn’t spend nearly as much time weaving in and out of people as we did last year when we started at the back (due to bathroom lines). The first four miles or so are mostly rolling hills with a net decline. Our average pace coming out of them was a 8:15 overall and although at times I felt we were going a little fast, I felt good. The goal was to stay below 8:40 in order to PR. I took a GU at about mile 5 and ended up having to wait a mile or so for water to wash it down with.

Our pace crept up a  bit during the flat portion and by the time we exited Harbor Island we were up to a 8:25 overall average pace. Somewhere on Harbor Island we gotten ahead of Jen.  I still felt good at this point, although not as great as the start. I took a GU around this time and ended up regretting it because I was without water for nearly 1.5 miles again. My mouth was dry and I had yet another side cramp (I had about 4 during the race in total). At around mile 10 I was starting to have some negative thoughts due to my dehydration and cramping. Luckily soon after I complained to Asia about this, we hit the water station that has a water mist gauntlet just ahead of it so I was able to cool off  and down two large cups of water.

As we entered downtown, I started feeling a little better. I could tell that Asia was feeling better than me though, and at this point I wasn’t sure I would be able to keep up with her if she picked it up once we got to the hill. We made it through both train crossings without having to stop (wait times for passing trains/trolleys can be up to 2 minutes if you are unlucky and get stopped!). I continued to feel pretty good going up A street but once we got to the steepest portion I slowed down a bit. When we turned onto 6th, the last 1/2 mile or so of hill, I just tried to keep my head up and think positive thoughts. All of the water and GU in my stomach was not sitting well, however, and this was the first and only time during a race that I thought I may actually throw up. I think maybe taking both of my GUs without water wasn’t a good idea.

Asia crept further and further ahead of me and at some point I just told myself to focus on my own pace. The hill was pretty miserable but once it was over I got back into stride and made my way through Balboa Park. Although I coudl see Asia ahead of me, I couldn’t pick up the pace enough to catch up to her. I wasn’t feeling nearly as great as at the end of the last race, but I was still making good progress. When I saw the final turn, I turned it up a notch and tried to sprint despite my exhaustion. My watch time showed 1:52:26 over the course of 13.2 miles (extra .1 miles for weaving/not taking the most direct course, which is typical).

My stomach was still not happy with me when I stopped running. It took about a half hour before any type of food even sounded remotely good. I’m not sure what happened but I hope it doesn’t again! Once we found all of our friends, we stood around discussing our individual races. Asia, Jen and I all PRed and the boys were just a minute or two off of their La Jolla times. At the finish line Jen, Mike and I collected our Triple Crown medals, which signified our completion of three specific San Diego half marathons in one year. We celebrated the race with a massive breakfast at one of our favorite San Diego breakfast establishments, the Mission Cafe. 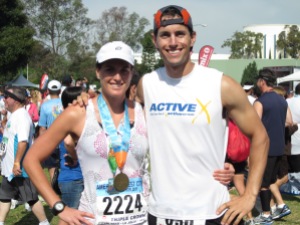 I don’t plan to race antoher half marathon for at least a year due to triathlon training. Perhaps we will run AFC next year in order to keep us busy after the Ironman is over. Maybe next year I’ll drop another 10 minutes and come in at 1:42!? We’ll see!