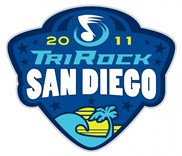 This Sunday I will compete in the TriRock Olympic Distance Triathlon which consists of a 1500 meter swim, a 20 mile bike ride and a 6.2 mile run. The race should take me about 2 1/2 to 3 hours (30-35 minute swim, 65-75 min bike, 50-55 min run plus transition) and since I’ve never raced a distance this length (ie.longer than a half marathon but shorter than a marathon), I honestly have no idea how to pace myself or how much fuel I will need. I asked Mike and he basically told me to push hard the entire time and drink some Cytomax and take a Gu. Mike is a big picture person. I’m detail oriented. Therefore, I went to the Internet for help.

Carbo-loading, or increasing carbohydrate intake to about 70% of total calories for the few days prior to an event, is recommended for any event over 90 minutes. This means that yes, an Olympic Distance triathlon warrants excess carb intake. However, in the past I’ve gone a little overboard (as most runners do at the prospect of guilt-free indulgence in pasta, bread and sweets) and ended up feeling a bit bloated on race day rather than lithe and speedy. Before my last half marathon I decided to avoid overeating and rather up carbohydrate intake for just the Friday and Saturday before the race, but not eat any more calories than normal. This is my plan for my upcoming race. Starting Friday I’ll tend to eat more carbs, but I won’t use it as an excuse for excess calories. I’ll eat my normal race day breakfast of two slices of toast with peanut butter and sliced banana and perhaps have a Gu just before the swim start, since I am in the last wave (2 hours after transition closes – boo!) 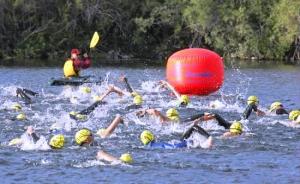 According to Active.com, it is advised to hold back on the first 400 meters of the swim, as people have a tendency to go all out which will cause a spike in heart rate. It will take a significant decrease in pace to get the heart rate back down so it is imperative not to go out too hard. You should feel that you are holding back. Don’t kick too much during this portion in order to conserve leg energy. After the first 400 meters, pick it up, but only swim as hard as you can while maintaining good form. Swimming with good form preserves your energy while also propelling you through the water more quickly. Pushing hard without good form may get you to T1 a little faster, but it will also leave you will much less energy for the bike and run.

Pacing and Nutrition on the Bike

It is vital to nutrition properly on the bike so that you are fueled for the run. Sip water throughout the race and try not to take big gulps. Water is better digested in small quantities. It is recommended to carry at least one water bottle full of at least 150 calories of sports drink. Depending on how long the swim took, it may be time to take a Gu or some other form of easy calories as soon as you get on the bike, as it is recommended to begin refueling about 45 minutes into strenuous exercise. Drinking the entire 150 calories of sports drink for the remainder of the bike ride should be enough calories to get you through, but if may need a second Gu if you are male.

As for pacing, when you come out of transition your heart rate will likely be very high. Try to back off just a bit but it’s ok to ride at an effort that feels like a 4 out of 5 (80% max heart rate). After about 20 minutes in this zone, kick up the gear to about 85-90% max effort. You should feel like you’re nearly going as fast as you could possibly go, but not quite full out.

Pacing and Nutrition on the Run 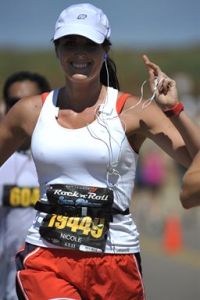 At this point  you should be about 1 1/2 – 2 hours into the triathlon and have consumed about 250 calories. It’s time to refuel with yet another Gu or Gu equivalent. The most efficient way to take the Gu is to carry it with you and take it with water at the first aid station, but if you’d rather, you can take it in transition. I plan to take it with me and get it down about a mile into the run after I’ve caught my breath.

During the first mile of the run, just focus on settling in and feeling out your legs, which will feel very odd from biking so hard. Run at about 75% effort for the first mile. During miles 2-4, pick up the pace to about 85% effort, or about 5-10 seconds slower than your lactate threshold effort (basically comfortably hard). From miles 4-5.5, you should pick up the pace to about 90% effort. For the last .7 miles, forget about heart rate and just run your heart out! Finish strong.

With only three days left until my longest triathlon to date, I am filled with both excitement and fear. Luckily since I’ve never completed an event this long, I have nothing to compare my race to. Unlike the sprint triathlon I completed in July, I also don’t know anyone else racing in my age group, except for my good friend Asia of course. At the end of the day, I just want to finish the race and I don’t plan to put too much pressure on myself if anything goes wrong. I just want to get through it in one piece! Hopefully the plan I outlined above goes off without a hitch and if I do screw up – I’m ok with that too!