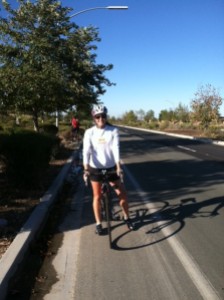 Yesterday we took the bikes out at 7 a.m. with one very important goal in mind – to cover at least 50 miles. Although the Half Ironman isn’t until the end of March, I have set the goal for myself to get in at least two half Ironman distance rides in before November. In November we will start seriously training for the marathon and there will be less time to ride, therefore I want to build a good base on the bike before then.

About a month and a half ago we did a 40 mile group ride through the Tri Club that started in Solana Beach and finished at the local Pizza Port. Since then we have repeated this ride several times and simply call it the “Pizza Port Ride.” If you ride from our house instead of from Solana Beach, the route is about 45 miles long. Since our goal yesterday was to make it to 50, we had to add on a loop down the coast at the end.

I am really becoming more comfortable on the bike. I tend to notice it most on this ride since it is VERY hilly. Basically the entire ride is made up of hills. The hills are another reason why we always chose this ride – the course at Couer D’Alene is very similar. You can check out the Pizza Port route here: http://www.mapmyride.com/routes/view/47338412. You’ll notice that neither the Pizza Port Ride nor the Ironman CDA course have much flat riding.

About 12 miles into the ride, Asia got a flat tire. This was her first flat in over 3 months riding and she had never changed one before. Luckily the boys were behind us on this ride (usually Mike and Jeremy ride ahead and wait for us at big turns), and they were able to make sure that we changed it correctly.

The rest of the Pizza Port course went fairly well for me. There is a gas station at about mile 19 that we always stop at to use the bathroom and fill up our water bottles if needed. It’s always a good mental break fast well. During the second half, however, Asia started to get pretty tired and her back was hurting bad. Asia and Jeremy just moved (they are just a few blocks from us now!) and Asia has been busy with work so they haven’t been able to join us on our last two weekend rides. And with the sun going down earlier, they also haven’t gotten in any weekday rides. This was their first time on the bike in three weeks.

By the time we finished the Pizza Port loops, Asia and Jeremy headed home and Mike and I decided to finish off the half century by doing a 8 or so mile loop down the coast.

One of the changes I made on this ride was to take along a 220 calorie Cliff bar with me for fuel. On past rides I’ve had only 150 calories of Cytomax and two 100 calorie Gus. This time I brought the Cliff bar, Cytomax and two Gus. My new fuel strategy seemed to be working and my energy level was high until about mile 48. However, I didn’t take my second Gu, thinking that I had enough energy to finish, but literally bonked at the final turn around. The remaining 4 miles were pretty difficult and I finished the ride exhausted.

The ride took us entirely too long to complete. With the flat tire, gas station stop, & water/bathroom break at the coast we were out on the road for nearly 5 hours. That is definitely NOT going to work. We will have to complete 100 mile training rides during peak Ironman training and they simply can’t take 10 hours to finish. In general, we just weren’t pushing hard enough throughout the ride and we just don’t have enough strength and power to get up the hills quickly enough yet. Mike is confident that this will change once we get our trainers and are able to get in some solid weekday rides. I really hope that is the case!

Although I felt accomplished in completing a 52 mile ride, I also know I have a long way to go. I was exhausted when I got off the bike. Clearly I have a ways to go before I feel strong enough to bust out a half marathon after a 56 mile ride. The good news is that I still have nearly 6 months until the Half Ironman and even longer til the Ironman. Rome wasn’t built in a day!