With Ironman training “officially” starting last week, I thought it’d be a great time to introduce my Official Ironman Training Team – Team WODS! I’ve talked about each member of my crew many times during the course of this blog, but I wanted to officially introduce the three people who  I will be spending most of my free time with for the next 6 1/2 months.

The name WODS was created just a few short weeks ago. We decided that with Ironman training approaching we needed a team name, one that perhaps we could even create awesome Ironman t-shirts for. We used our creative minds to come up with a combination of our last initials and a phrase to go with it. W stands for Woyski, O is for Osborne, D is for Dobransky and S is for Simonelli. The team slogan is Win Or Die Suffering.  Cute huh?

Mike aka “Doby Diesel” or “Mongo”

Mike’s Mongo nickname arose from his ability to consume inordinate quantities of food, especially after a long day surfing or training (he has been known to eat a family size lasagna by himself).  Mike has been athletic his whole life and grew up playing both basketball and hockey competitively. He was introduced to triathlon and long distance running when he started work at the Active Network in 2007. He has competed in several sprint and olympic distance triathlons (placing top 3 in his age group at least three times), one Half Ironman (Vineman 2009) and one Ironman (Cozumel 2009). He is very fast but even more humble.

Jeremy ran his first half marathon with Asia back in 2008 and then ran his second half marathon in April of 2011, PRing by over 40 minutes with a 1:36, while the four of us trained together for our first marathon. Jeremy’s first triathlon was in July 2011, the day after we registered for our Ironman. He also won 1st place overall at the August TCSD beginner triathlon, officially graduating to a “non-beginner.” Jeremy has big aspirations – one day he’d like to complete a 100 mile race and he’d also like to climb Everest.

Asia aka “The Beast” 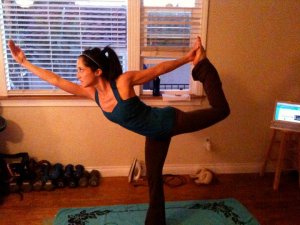 Asia’s Beast nickname came from Jeremy, probably at some point during their first or second round of P90X. Although she’s little, Asia is tough. After her second round of P90x she could do 50 push-ups and 7 pull-ups! She ran her first half marathon with Jeremy in 2008 and her second with me in 2010 (before P90X). After 2 rounds of P90x, she PRed on her third half marathon by nearly 20 minutes! She also finished 5th in her age group at the Camp Pendleton 10k Mud Run in June, just one week after we ran our first marathon.  Asia has conquered her fear of open water swimming and is now focusing on her swim technique so she can bust out the 2.4 mile Ironman swim like a champ. Asia’s first sprint triathlon was also Solana Beach in July.

Nicole aka “Tazmania” or “Mongita”

My Tazmania nickname comes from Mike and is in reference to my impatient cooking style which results in the kitchen looking like the Tazmanian Devil came through it when I’m finished. The Mongita is the female version of Mike’s Mongo nickname, which implies that I can put down some serious food when I want to. As for my athletic background, I played sports my whole life and was on the swim and field hockey teams in high school. I trained and ran my first half marathon all alone in January of 2009 and nearly gave up on the sport until Asia and I trained for the AFC half marathon in August 2010 and my love of endurance events truly began there. In 2011 I completed the San Diego triple crown (Carlsbad, La Jolla and AFC half marathons) and also ran my first marathon with Team WODs, crossing the finish line hand in hand with Asia.  My first sprint triathlon was in July of 2011, where I finished in the top 20% of my age group. I was the third woman to finish the TriClub beginner triathlon in August and finished 3rd in my age group at the TriRock Olympic in September.

Although 3 of the 4 of Team WODS are fairly new to endurance events and to triathlon, I believe that we have the passion and the attitude to finish. We have proven that with hard work and dedication we can accomplish our goals. The four of us completed P90X (Mike and my first round, Asia and Jeremy’s’ second round) while we trained for our first marathon, often putting in 10-11 hour weeks. We aren’t afraid of the Ironman volume (ok maybe a little) – we know that we can do it. We have been smart about our preparation and planning for this event and have been reading books, researching and discussing it constantly since the idea occurred. We believe that although we are beginners to the sport, we have a solid base to work with.

I feel very fortunate to have such a close group of friends to train with. I think that this support will be pivotal in getting through those tough, long weeks. Just this week when I was pushing myself to run my intervals on the treadmill I thought about how Asia was doing the very same thing at her own gym and it helped me get through them. We won’t be doing every workout together, as we all will have individual plans tailored to our own schedules, strengths and weaknesses, but we will have each other’s support, and that’s the most important thing.