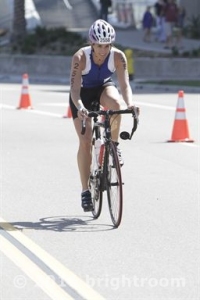 The marathon is over, I’ve had a week to recover, and now it’s time to get to business! We have 7 weeks until the Half Ironman and it’s time to ramp up my bike training. Since the bike is my weakest of the three sports (at TriRock I was 4th in the swim, 3rd on the run, and 8th on the bike), this is a long time coming, but the last few months have been very run-focused as I prepared for the marathon. I definitely have been good about getting in three rides a week,  but I really meant to get in at least four. There were some weeks that I did ride 4 times,  but overall there were more that I didn’t. Now that the marathon is over, I’ve changed up my schedule and decided that the next 7 weeks of training is going to be focused on improving my cycling endurance and speed.

The first part of my bike training plan is to ride my bike 5 times a week. One of these rides will be my long ride, one will be a high intensity interval session (i.e. Sufferfest), and there will be one 90 minute and two 60 minute zone 2 spin sessions per week.

We are also going to break the 50 mile mark and start doing some longer rides. We’ve been kind of stuck between the 40-50 mile ride mark for a few months now, mostly due to the fact that we were running 16-21 miles on the weekends. Starting this Saturday, we’ll be bumping it up to 60 miles, then 65, then 70, backing it down, getting in another 70 and then starting the taper for the Half Ironman.

The sacrifice in my schedule that was made to accomodate the 5 bike rides was one easy 5-6 mile run that I had scheduled on Wednesdays. I think that replacing this run with an easy bike ride will not do any damage to my run split at the Half Ironman since I just spent so much time training for the marathon. I’ll still be able to get three runs in – one speed work session, one long run and one run off the bike.

Post Half Ironman I will probably go back to three swims, four runs and four bikes schedule, but for now, the focus is the bike and I’m ready to make some big improvements! I’ve already seen a pretty incredible improvement since I started cycling last June and I hope to keep getting better.  As I learned in my V02 Max test, I have potential to be a very strong cyclist and I’m excited to see what some serious focus on the bike can do for me.

Another focus in the coming weeks will be my nutrition on the bike. Based on some advice I’ve received, I’m going to purchase Carbopro, which is a flavorless pure carbohydrate drink. I’m going to mix this with a subtle electrolyte mix (still deciding on this one) and then eat my Stinger Waffles. I’m going to start with 200 calories/hour first and see how I feel. From there, I’ll tweak it and see what works best for me. During the full Ironman I plan to incorporate something like a peanut butter banana sandwich but I don’t think I’ll need this for the Half Ironman.

What  is your nutrition strategy for long bike rides and the bike portion of a long race?