It’s now been three weeks since I raced my first Ironman. People who are not familiar with racing or know much about the Ironman distance, are surprised when I tell them that I’m still recovering from the race. According to a lot of research I’ve done, it actually takes about 6-8 weeks to recover from an Ironman. 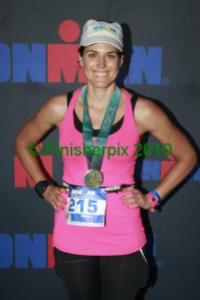 Immediately following the race, I sat down in the medical tent for a few minutes, declined the free 10 minute massage (there was a wait), and then got up and found my family. We found a bench and I drank water until my stomach finally felt hungry. Then I ate a piece of pizza and later, some fruit and then even later, a lot  more pizza. I didn’t get a good night’s sleep that night but did manage to get in two naps the following day. I didn’t get a massage and I didn’t go for a short recovery swim in the lake. Instead, I ate fattening food and drank beer for the next two days. Luckily  being in a small city with no car meant that we did quite a bit of walking, which helps aid recovery.

Don’t do as I did, do as I say. According to articles I found on Active.com, Ironman.com and Cycleops.com, after the Ironman you should get a massage, get a good nights sleep, avoid fatty foods and refined sugars, avoid alcohol and rest rest rest. Ironman.com argues, “The body must go into overtime to repair the damage from the race in terms of the muscular and cardiovascular systems.  Your immune system will work overtime as well to help heal you internally along with trying to keep the variety of germs and virus’s from getting you sick.” One thing I did do that is recommended is drink plenty of water- I am pretty much an expert at water consumption.

Although I’m sure that doing all of the above will speed up recovery, it’s really no fun. Personally, I think that you should kick back and relax and enjoy your hard work with a hard-earned beer and plate of french fries. But that’s just me.

Despite a rocky start to my Ironman recovery, I think I did a good job at recovering for the next two weeks. As soon as we got back to San Diego, Mike and I adopted a mostly plant-based diet and have been eating more lentils, quinoa, spinach, garbanzo beans, bell peppers, hummus, broccoli, avocados, almonds and fruit than ever before. Although I did buy Almond Milk ice cream to supplement to sweet tooth, my sugar cravings are much lower and I’ve been able to cut way back on my sugar intake.

In addition to a healthy diet, we’ve been sleeping in every day, getting at least 8-9 hours of sleep each night. For the first two weeks, we avoided exercise entirely, although we did take quite a few long walks and I don’t feel like we just sat on the couch every night. We caught up with friends after work and on the weekends, cleaned our house, frequented farmer’s markets, and finally felt like normal human beings again.

Week 1:  As the initial days pass, you actually feel better. You are psyched about your Ironman finish and excited about the future. Maybe you even signed up for next year’s race. Whatever is on your mind, chances are—exercise isn’t. And that’s a good thing. Your biggest workout right now should be some quality walking with one or two very short swims.

Weeks 2- 3: This is the Honeymoon Phase, where you feel good enough to work out, but really shouldn’t. If you actually push yourself here, you’ll find that after 45 minutes to an hour, you simply run out of power. Your heart rate will drop and no amount of food or coffee will revive you. Exercise in this period should be no longer than an hour and should be done at a very light intensity. Overdoing it here can really set you back later in your year. Extended swims and light cycling should compose the majority of your program.

I experienced this “Honeymoon Phase” this past week. After two weeks of no exercise and a big weekend in Vegas for a good friend’s bachelorette, I was more than pumped to get back into working out. I missed the feeling of a good workout session and was looking forward to being sore from a workout again. Before I even did the Ironman I told myself that for the first month post-Ironman I would only workout if I felt like it and would only do workouts that I wanted to do.

Monday night I decided to do a Turbo Kickbox class at my local gym. I used to frequent these classes 2-3x a week and was really good at all the moves. I got a friend to join me and we had a great time jumping around, punching and kicking the air, confused about the moves (the teacher wasn’t very good at explaining and we had never done the routine before). I felt good for my first workout back and that night decided I’d do a Body Pump class the next night at the same time. However, come Tuesday I was super sore! My 60 minute cardio workout that was previously a walk in the park apparently was a bit much. I decided to skip the weight lifting class. When I got home after a 10.5 hour workday, I was antsy to get my body moving so I went for what was supposed to be a 3 mile run (I probably should have opted for a easy spin or swim but I had no desire to do either!). The first .3 miles I felt great but soon my legs felt heavy and breathing wasn’t as easy. I made it about 1 mile and then took the stairs down to the beach and ran on the sand home. This workout is what really proved to me that I was still in serious recovery mode!

Wednesday night Mike and I went for a walk instead of any exercise and Thursday we joined some friends for a Road Runner Sports Adventure Run. The Adventure Run was really fun – it’s basically an informal scavenger hunt for raffle tickets. At the end, everyone drinks a free beer and they raffle off prizes. We ended up running about 3.5 miles all in all and did some push-ups, squats and burpees at some of the stations. Running was much easier this time and I had a great time with my friends. Friday I rested again and was feeling way better. Saturday I went to a spin class and did some upper body lifting and Sunday I went for a run with Asia. During that run on Sunday I felt nearly back to normal – our pace wasn’t fantastic but the endurance was there.

Week Four and Beyond: This is the Transition Phase. If you have been recovering well and have felt good enough to include some consistent aerobic activity, then you could be ready to transition back to your regular training.

Although the Active.com article I mentioned above indicates that after week 4 you are in the clear to get back to regular training, many other articles I read caution against immediately jumping into racing and/or hard training.

Since I have a half marathon that I hope to PR big time at 8 weeks out from my race, I was very curious on whether or not that was a reasonable expectation. Here’s more advice from Active.com on getting back to racing:

According to this, I should be ready to have a solid race at my half-marathon 8 weeks out from Ironman, although it’s a possibility that I’ll still be recovering a bit.

As for triathlon – as of now, I’ve decided not to do the Olympic triathlon in September that I had planned to do, mostly due to the high registration fee. Although I am still staying true to my word that I wouldn’t do any workouts that I don’t want to do in the first month post-Ironman, I have little voices in my head that tell me I should get back to the pool even though I have no desire to do so. Now that I have decided most likely not to do another triathlon this season, it’s even harder to motivate myself to get back to masters swim. However, I’m not going to worry about any of  that now – I’m still recovering and working out purely for the joy of it.

How soon have you raced post-Ironman? Or, how long did you go before swim/bike/run after a big race?