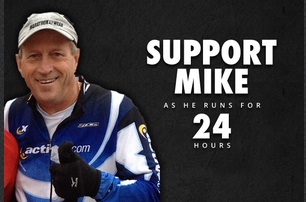 I’ve heard of a lot of ways to raise funds and awareness for a cause – selling lemonade,  holding an auction, organizing a gala, soliciting wrapping paper or king size candy bars and even running a marathon. No matter how you do it, it’s pretty awesome when anyone spends their precious free time in an effort to promote a cause they believe in. There are also a lot of ways to mourn a loved one that has passed, and at times, these two motivators combine into one. For example, the Blazeman Foundation was set up to not only mourn and celebrate the life of Jon Blais but also to promote awareness for and raise funds for research on the diseases that ended his life, ALS.

This past weekend I witnessed a pretty cool way to promote awareness for a cause and mourn a loved one simultaneously. Ultrarunner Mike Rouse (also my  boyfriend Mike’s coworker) ran 24 consecutive hours around a 2.4 mile loop on Fiesta Island in San Diego to honor and remember the 30 men (mostly SEALS) who died on August 6, 2011 in Afghanistan, including a good friend of his J.T. Tumilson, as well as raise funds for charities that support troops as they transition from deployment to home.

I received a call on Saturday, August 6th, 2011, that will forever change my life. It said that my dear friend, Jon T. Tumilson (JT, to most, if not all of his friends), had been killed in Afghanistan in the helicopter crash which we all now know included the deaths of 29 other brave American heroes. These 30 warriors gave the ultimate sacrifice for our country and for freedom. I will never forget. We can never forget. It is with that idea in mind, that on Saturday, July 28th, 2012, the day before the Joggin’ for Frogmen 5K, I will dedicate a 24 Hour Run to commemorate those lives and maintain the memory of what was sacrificed that day on August 6th, 2011. I will be wearing a different shirt for each of a 5K/3.1mile loop to honor the lives of each of these men, with the last one being that of Jon T. Tumilson, until I have completed the 24 hours of running. I would ask that each of you assist me in honoring these sacrificed lives by donating on this fundraising page below.

Mike began his run at 7 a.m. last Saturday on Fiesta Island and around 2 or 3 a.m. left the island to make his way the way to the start line of the Jogging for Frogmen 5k, about 12 miles east. Besides those last few hours of making forward progress toward a final destination, Mike literally ran in circles for 24 hours. Although Fiesta Island is surrounded by the beautiful Mission Bay, the island itself is dry, brown and desolate and not particularly beautiful to behold. The final 2.4 miles of the Rock n Roll Marathon are on Fiesta Island and race participants dread this portion of the race due to the lack of spectators, dirt road and how cruelly close the entrance to the island is from the finish line. I have pretty bad memories of Fiesta Island from my experience running Rock and Roll so I can only imagine  how Mike must have felt running around the island over and over again in the middle of summer.

Mike is a well-liked member of the San Diego Running and Active Network community and he had a lot of support on the course. His friends and family set up home base just inside the entrance to the island with a tent, BBQ, coolers, and chairs. He invited everyone he knew to come out and run a lap with him and it seemed that nearly everyone did! We showed up at about 8:30 PM on Saturday night and lucky for us, within just a few minutes Mike showed up with his entire posse of about 8 people that had completed the last loop with him. We heard that during the day he was accompanied by up to 15 people per lap. Also, during the day he had been running. Now, he was walking (who could blame him?).

When Mike reached the pit stop, he immediately flopped into a reclining beach chair. He had a huge blister on the bottom of his foot so he took the insole out of his shoe and used a knife to cut a hole in it so allow more space for the blister. After a surprisingly short period of rest, he got up, put on a new shirt to honor another one of the crash victims, and off we went. At first I didn’t realize that he had stopped running so I said to him, “Mike what pace are we running?” and he said “This is it. I ran the first 9 hours but now this is it” and laughed a little. Despite walking, we were going at a pretty good clip. There were about six us in the group walking with him and once we got a few minutes in he said to us, “I’m going to walk a bit ahead and I’m not going to talk. I am in a pretty dark place right now but I like to listen to you guys talk so please keep talking to each other.” With that, he picked up his pace and put a few yards of distance between himself and the group. We continued to talk amongst ourselves, as he had asked.

The 2.4 mile loop seemed to last quite a while since we were walking. I couldn’t help but look forward to stopping and getting back in the warm car since  I’d done two one-hour workout classes at the gym that morning and had been on my feet running errands all day. What a wimp I was compared to Mike! He had been out running and walking all day. My discomfort was nothing compared to his and he still had 10 hours left to go!

After we finished the loop, it was feeding time for Mike. He sat back in the chair and immediately his wife brought him a hot dog (apparently his ultra running fuel of choice!). Others brought him water and finally, a fresh shirt to remember another victim. More people had arrived to take over walking the next lap and one of them asked him “are you going to do it Mikey?” and he replied, “I always finish.” Mike Rouse has completed seventeen 100 mile races and 4 Ultraman World Championships. Did I mention he’s in his 60s? This guy is pretty incredible (his wife is too – she qualifies for Kona every year)!

Mike finished his 24 hour run at 7 a.m. at the start line of the Jogging for Frogmen 5k. He went on to announce the race and afterward I’m sure he slept all day!

See below for the newscast on his inspiring feat: