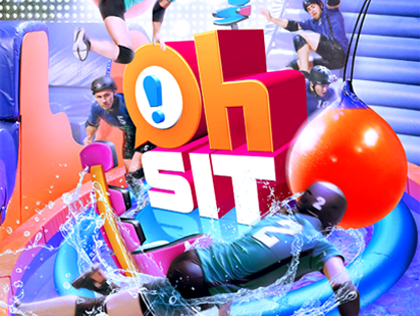 Last night was my television debut! In May, while training for the Ironman, I spent a day in LA filming for a new game show called “Oh Sit.” The show is brand new so I knew nothing about it when I auditioned other than it was a “high octane version of musical chairs” in which I had a chance to win “a large cash prize” (I was later told it was up to $50,000). I had SO much fun filming the show and even more fun watching it last night. It was incredibly interesting to see which footage they used (we filmed a lot more than they showed of course) and what angle they chose for my character and nickname. I was very relieved/pleased to find out my nickname was a play on Ironman – “Ironma’am!” The show incorporated a lot of corny puns about my fitness such as “Ironma’am raises her iron fist!”

During filming, my main concern was not getting hurt since I was only a month away from IM CdA. I took it pretty easy over the obstacles and didn’t push or shove anyone since I didn’t want to get it back at me. You’ll have to watch and see how that turned out for me….

Here’s a link to the show online if you are interested in watching!

My dream show: The Amazing Race (let me know if you have any connections…. )!!!

Would you go on a game show you knew nothing about to win up to $50k? Have you ever wanted to be on a reality show or game show? Which one?

March 1: 6 Week Run + Strength Race Training Group- Train for a virtual or in person 5K, 10K or Half Marathon with a professional running plan incorporating Beachbody workouts with a community of runners!!!