One of my favorite things about training for races is that I get to do so with friends. I trained for my first half marathon alone and I said I’d never do another one. That was until Asia suggested we run and train for our 2nd half together about a year and a half after my first. After that race, I joined a running club to train for my next 2 half marathons and my first full marathon. During my first full marathon long training runs, I’d have as many as five girls to run with and the miles flew by. After that race, our little group never really made its way back together, but I have run with almost all of the girls since then at least once!

After our first marathon (Rock n Roll San Diego 2011), Asia and I trained together for AFC half and then the Surf City Marathon. We also trained for our first half and full Ironman together in the first half of this year, along with our boyfriends (team WODS!). Asia has been my constant companion in our quest for PRs and she also shares my goal to qualify for Boston. We have bizarrely similar paces, in and out of races (we always finish within a minute of each other at running races and even our triathlon run times are super close!). At the Surf City Marathon in February we paced each other to our goal of a sub 3:50 marathon. I’m pretty convinced that running together makes us better than if we were to each run separately. 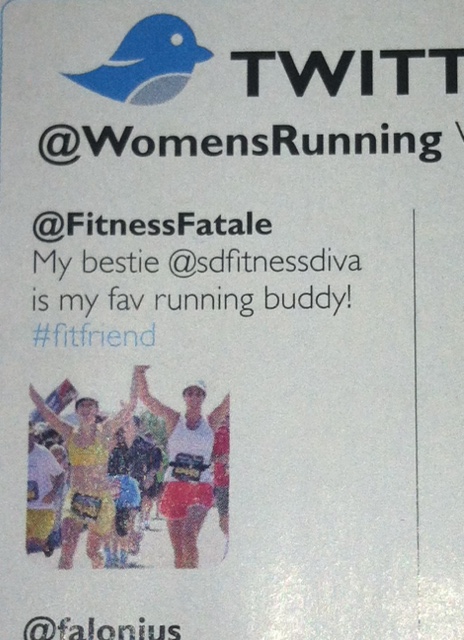 I found out that my tweet to Women’s Running Magazine about my favorite running buddy was selected to be published in the magazine!

Since Asia did not finish Ironman CdA and decided to sign up for Ironman Cozumel and the rest of my running buddies have (hopefully) temporarily retired from racing, I’ve been training and racing largely alone since July. I can’t say completely alone of course since my amazingly supportive boyfriend Mike has also been racing with me and has even joined me on a few runs! I’ve also been able to recruit my co-worker Allison who also ran Rock n Roll San Diego with me last year to join me once a week for my Wednesday recovery run, but I wasn’t convincing enough to get her to sign up for Surf City with me. I’ve also started to get to know one of Mike’s friend’s wives during our (mostly) weekly meet-up runs at the local Moving Shoes store, but she is not training for a marathon. And there have been a few times that Asia’s training schedule has magically worked with mine and we’ve been able to log some miles together.

But in between those miles with friends there have been many more alone. Although I definitely enjoy running enough to run with my thoughts and music alone, I’ve never run over 12 miles by myself and I can’t say I’m looking forward to the 14-20 mile runs I have planned every single weekend from now until February. With Asia beginning her taper for Cozumel and then taking time off after the race to recover, I won’t have the hope that she can join me. Since Surf City is not a San Diego race, there aren’t any groups that are training for them and Mike’s pace is far too fast for me to keep up with for that long (and my pace feels uncomfortably slow for him!).

My run last week with the girls in San Francisco really brought back good memories of my group training runs for RnR San Diego. So, if you’re out there – I’m taking applications for a Runny Buddy.