I can’t believe it, but another season of Girls on the Run is over. This season I volunteered with the division of Girls on the Run called Girls on Track (more about it here), which is designed for girls in 6-7th grades rather than girls in 3rd-5th. Last night was our end of season party and we celebrated the girls’ accomplishments with a food, crafts and awards!

Thanks Monika for the photo 🙂

The girls this season were VERY animated and talkative so we had quite a few laughs over the course of the 12 week season. My favorite moments included the session that we discussed love, crushes and relationships (they had  A LOT to say about this one), the time the girls had to tell us something they were thankful for during each  lap and one girl told me she was thankful for “filet mignon with a cabernet reduction” (umm I didn’t even know what a reduction was when I was 12), and the practice 5k, when all girls completed 12 laps around the track, collecting brightly colored pipe cleaners for each lap completed.

Coaches at the Practice 5k! 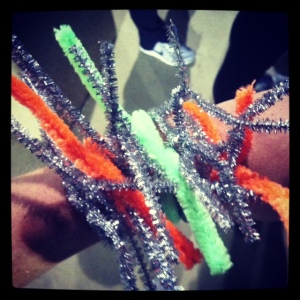 The Bracelets I Collected During the Practice 5k

Unfortunately, I missed the most important event of the season – the Sparkle and Shine 5k. Last year I had a blast being a Running Buddy to Miley during the event, but this year I was knew I was returning from Belize very late the night before and I wasn’t sure I’d be able to make it to the race so I didn’t sign up as a Running Buddy. I was sad to miss the race but I know there will be more! From what I heard last night at the celebration, everyone did great.

I’m looking forward to more seasons and more fun with Girls on the Run! The Fall season starts in February and I plan to coach again. If you are interested in joining us for the Spring 2013 season, you can apply here. If you don’t have time to coach, you can join a committee (like the 5k planning committee), sign up as a Running Buddy, or contribute to Girls on the Run through the race fundraising program called SoleMates.