I love setting goals and working toward achieving them. It’s a big reason why I love running and endurance sports so much. In January I set 5 goals for myself to accomplish in 2012 – let’s see how I did!

1) Finish Ironman Couer D’Alene. Since this was my most important goal, it was the focus of most of my year and I did accomplish it. I don’t take it for granted that I was able to get to the start line injury free and was able to complete the entire race. I have more respect for the Ironman distance now than I did when I signed up for the race and more than when I wrote this goal last year. So many things could have gone wrong but luckily, nothing major did and I became an Ironman on June 24, 2012. I have never worked so hard for a goal in my life and it was a wonderful feeling to run down the finisher’s chute knowing that my hard work paid off. 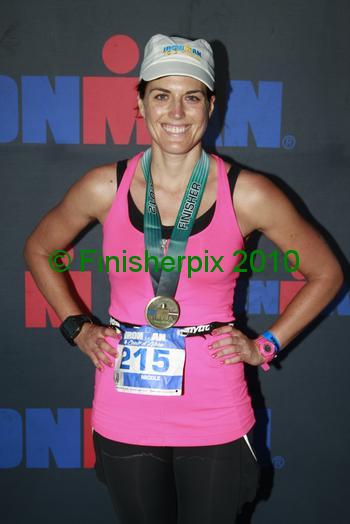 2) Run a Sub 1:45 Half Marathon. I definitely failed at this one! I didn’t set the half marathon distance as a priority this year and only ran 2 of them – one shortly after the Ironman and another shortly after I finally began to gain some of my lost fitness back after recovering from the Ironman (and barely PRed with a 1:51). Despite that, this goal was pretty lofty and I actually don’t think I realized how hard it would be to accomplish when I set it. Nonetheless, it will remain a goal of mine, hopefully to be achieved in 2013!

3) Complete P90X2. I didn’t even try this one. I had the idea that post Ironman I would have so much energy and excitement to continue double workout days and I could somehow manage to do P90X2 while also training for half marathons and attending all my friend’s weddings. Instead, I got into Dailey Method and slept in more days. I don’t regret it- I deserved it after a year of intense training for the Ironman!

4) Run a Sub 3:50 Marathon.  When I originally set this goal, I wasn’t sure I was going to even attempt it at Surf City 2012. However, once I was able to do my 10 Yasso 800’s at 3:50, I decided to just go for it at that race. The worst that could happen would be that I blew up but at least I tried! Surf City was a great race – although it was quite warm for February (70s and sunny!), Asia and I both had a great race and were shocked at how easy the 8:45 pace felt for the majority of the race. At the end, Asia and I cheered each other on during our times of doubt and we both achieved our goal of sub 3:50! I’m not sure I could have done it without her (or with Jeremy who ran me in the last 1/2 mile when I was exhausted).  I’m also glad we went for this goal at Surf City because I didn’t run another marathon this year.

5) Podium at a Triathlon. I knew there was no chance of a podium at either Oceanside 70.3 or IM CdA, but I figured if I entered a sprint or Olympic I’d have a shot since I ended up 3rd in my age group at my first Olympic triathlon in 2011. I entered the San Diego Classic in September without much motivation to train but luckily my residual Ironman fitness carried me to the finish line 2nd in my age group!

Considering the weight of my primary goal of completing IM CdA, three out of five goals isn’t bad! I am a bit disappointed that I didn’t come closer to the half marathon goal mostly because my big goal for 2013 is to qualify for Boston and I surely need to have the fitness to run a sub 1:45 half to do it. However, I actually feel fairly confident that if I were to run a half marathon today (with some taper, of course) that I’d be pretty close to my goal. But I guess we’ll have to wait until 2013 to find out!

The theme of this year was some serious strength and growth in my fitness in the first half of the year followed by some disappointments in the second half. I had naively expected to come out of the Ironman a much faster and stronger runner, whereas the reality was that I just really needed a break. I was mentally and physically exhausted and I needed to focus on recovery as well as spending time with friends and family. The result of which was a few disappointing races, but I’m ok with sacrificing a PR or two for mental health and relationships! Because I took the time to rest and mentally recharge, I am excited going into 2013 and ready to achieve some new goals!

What was your #1 goal for 2012 and did you achieve it? Did you also get excited and set too many goals like me!?