The BQ That Wasn't - Fitness Fatale
I just arrived home from a really fun race weekend in Eugene. All in all, it was a great weekend full of getting to know new and old friends, eating at yummy new restaurants, and lots of girl talk. Unfortunately there wasn’t as much running as I had hoped but in the end, it wasn’t all for naught. I learned a lot about myself as a runner this weekend as well as earned even more respect for the marathon distance. I didn’t earn my BQ – I didn’t even finish a marathon – but it was definitely a weekend I won’t forget.
Pre-Race Festivities 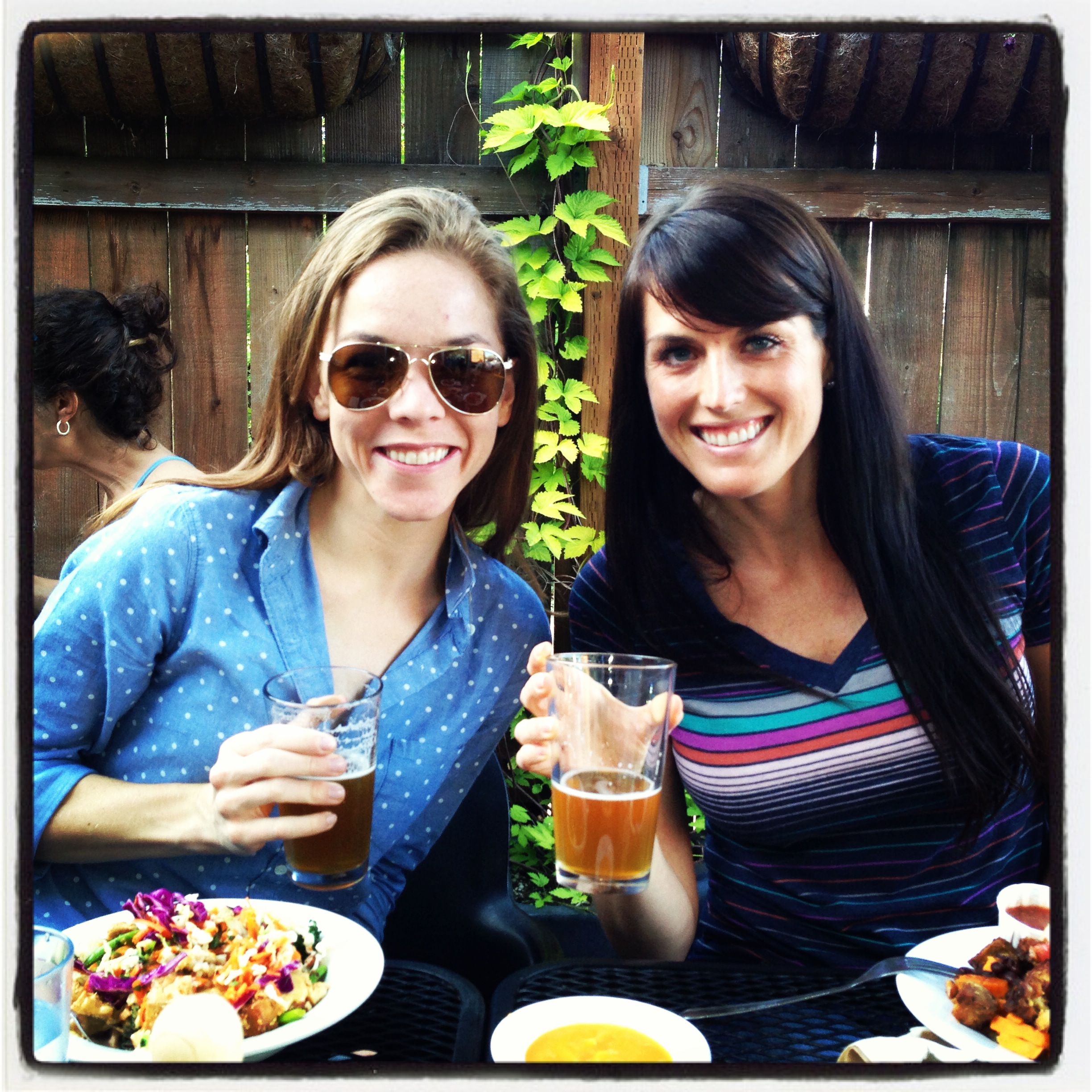 Friday morning I made my way to Eugene, prepared for a long travel day by myself. Asia was on an earlier flight with a different airline and I’d meet up with her and Page at the airport when I landed. Luckily I was reading a pretty awesome book (Gone Girl – highly recommend!) so the day went quickly. On the 2nd flight on a small plane to Eugene, I was seated next to an athletic looking woman with a foam roller in her bag so I immediately asked if she was running the race. Her name is Lora and I was right!
We quickly got to chatting about how we both were going for our BQ and shared our stories with each other for the next hour and a half of the flight. Turns out, I had just found her blog via Twitter just days before (yes we shared Twitter handles – the plane needed to go back to the terminal for maintenance check so we were able to turn on our phones and that’s when I made the connection). It also turned out that we were both on the same Google Group emails that a group of runner bloggers had created to keep track of the various meet-ups for the weekend. Small world! 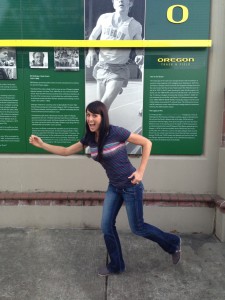 Once we arrived in Eugene, Page and Asia were waiting with the rental car and we gave Lora a ride to her hotel ( we were not strangers anymore!). We were all hungry so we headed straight to a vegan friendly restaurant that I had found on Yelp and dug into a big bowl of chips and salsa and delicious, healthy bowls full of brown rice, black beans, sweet potatoes, plantains and tempeh. Delish! Page and I washed it down with a beer and we had a great time getting to know each other better (Page and Asia had never met IRL). After dinner we headed to the University of Oregon track where legend Prefontaine himself used to run and where the Olympic trials are held. The track also served as the finish line for the marathon on Sunday. It was fun to see it and imagine ourselves achieving our goals there.
After a relaxing night on Friday, we woke up refreshed on Saturday and immediately headed out for a pre-arranged “shake out run” with a big group of fellow runners and bloggers (many of which are Oiselle ambassadors). I was blown away by how amazingly welcoming and friendly all of the bloggers are. It was really fun to meet people who I have only known via their Twitter handle or blogs. It was also awesome to meet even more great women who I didn’t know via their Twitter avatar previously. The shake out run felt fine on my legs – it was just an easy run.I stretched afterward for a bit (probably not as much as I would have had I been at home) and then after more chatting we all went our separate ways in search of food.

Asia, Page and I found a yummy all vegetarian/vegan restaurant that served breakfast. I was wooed by the promise of vegan french toast (although I ordered it with a side of eggs and a soy sausage so the breakfast wasn’t fully vegan) and the coffee was delicious. Post breakfast we headed back to the hotel for showers and more relaxing before heading to the expo.

The expo was small but well run. There was a banner prompting runners to send well wishes to the Boston Marathon and we all signed it. While at the expo we ran into even more of our blogger friends and also saw Lora from the plane ride as well. We went back to the room for more relaxing before heading out to a local vegan restaurant that had a simple marinara pasta on its menu for dinner. The meal came with vegan garlic bread and a yummy soup but unfortunately our pasta was stone cold. We awkwardly sent it back and started to notice some of the things we had read on the (4/5 star) yelp reviews – dirty floors, odd people. The pasta came back luke warm rather than cold but I ate it anyway. Page took hers back to the room with intentions of microwaving it later but never at it. #EugFail 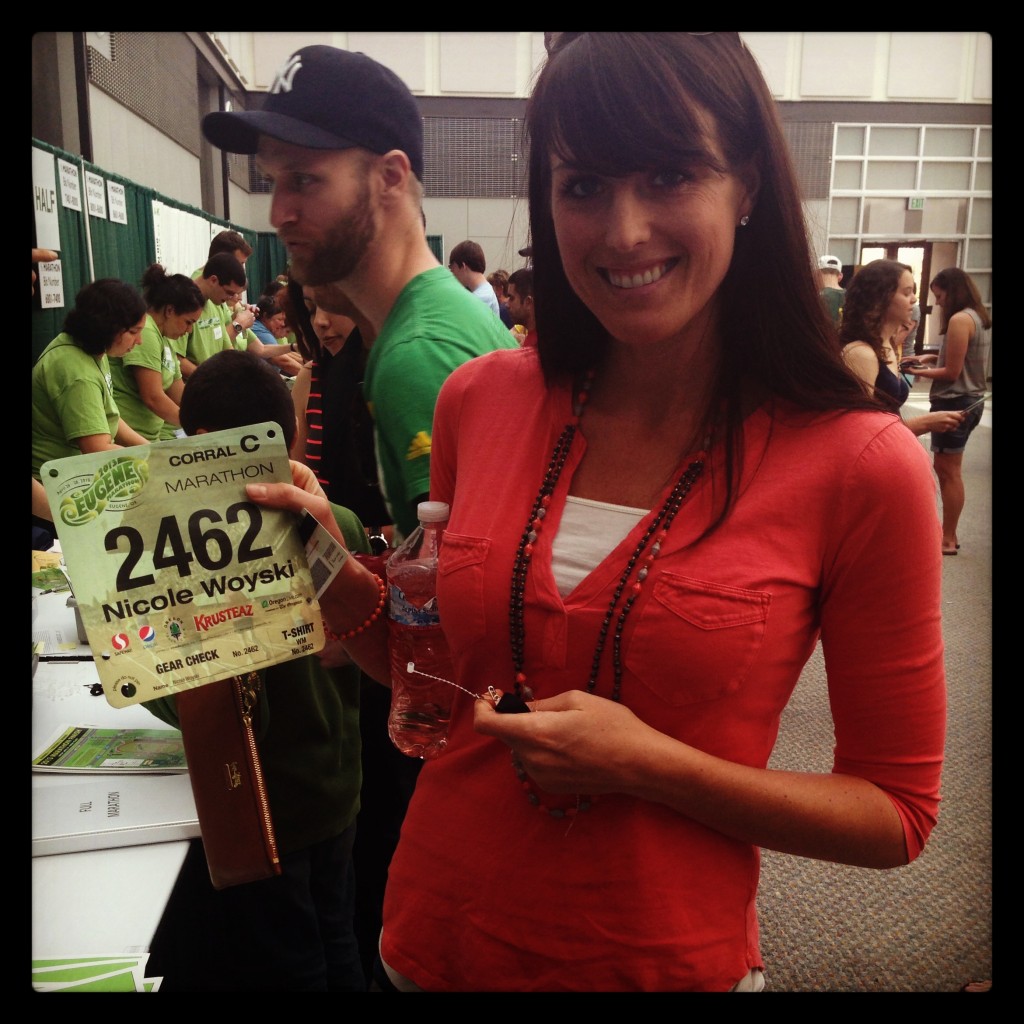 After dinner we went back to Hayward field to get more pumped up about the race and we took a bunch of fun photos on the historic track and in front of the recently constructed finish line. We were back in our hotel room before 8 p.m. to get ready for the next day, relax and get in bed early. Once I got in bed, I got really nervous about the race and I had a hard time sleeping. My mind was racing and my heart was pounding and I just couldn’t get over the nerves. Eventually, I did and fell asleep and didn’t wake up until morning. 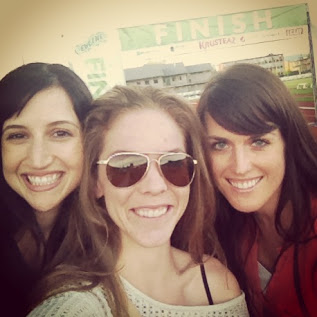 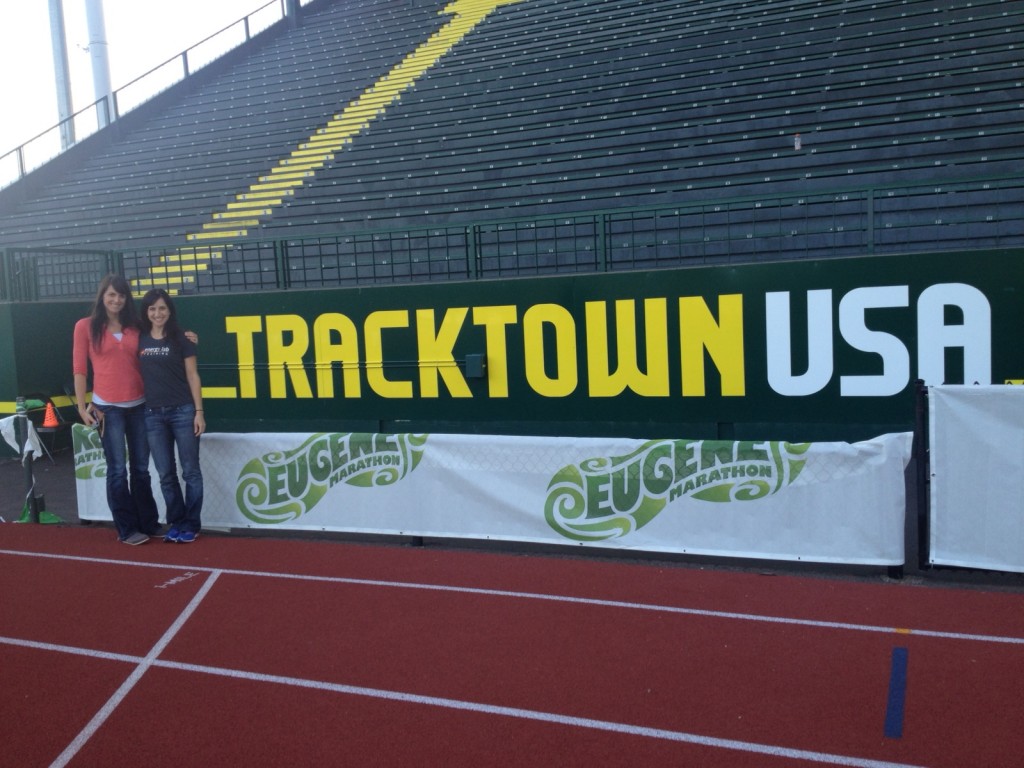 Race morning went just as planned. First I opened the card that Mike had written to me to be opened on race morning. It gave me a boost and I also found myself wishing here was there. I ate cereal that I had brought from home with almond milk we got at Trader Joes and even drank the same type of coffee and creamer I always do thanks to a 711 being right across the street from our hotel (free entrainment from the drunk Everything seemed fine pre-race and my nerves never got as strong as they were the night before.
After bathroom breaks, warm-up, etc, Asia and I found ourselves in the front of corral C, the largest of the five corrals. We stood slightly behind the pacer (who we had talked to at the expo and had told us the first mile is usually a bit slow due to the crowds but he picks it up for the 2nd mile and t hen runs even splits. We had decided we might start with him and then play it by ear), listened to the national ant hum nervously and soon we were off! 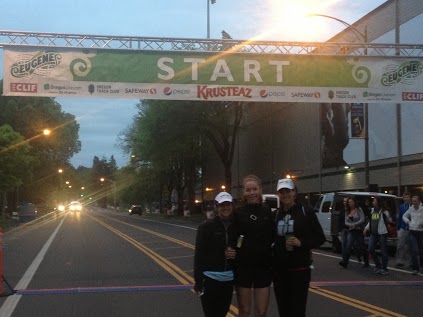 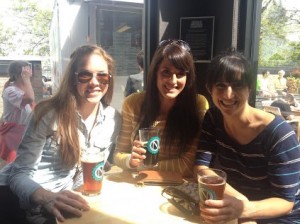 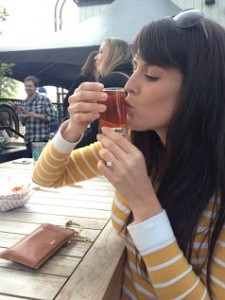 Figuring Out What Happened
I tried working though all the possibilities of why something like this could have happened. At first I considered the shady pasta I ate the night before from the dirty cafe. I considered the fact that I forgot to take my birth control on Saturday night so I took it Sunday morning instead (which I never do). I thought of everything I could. Only later did I realize after talking to some friends who have had them and doing some research, that I think I had a panic attack. I’ve never had one mine my life but the description seemed to fit. In several articles it compared the way your body feels after panic attack to having just completed a marathon. Panic attacks wipe your energy out. I think I panicked for a variety of reasons – most monumentally the pressure I’ve put on myself for this race. I’ve been training for 7 months for one goal. I’ve told everyone I know (and many I don’t know who read this blog!) that I’m going to BQ. Being around all the running friends that weekend put additional pressure – many others were trying to BQ and they all knew I was going for it. I had told myself that Eugene was my one and only chance to qualify for the 2014 Boston Marathon because I would be busy wedding planning after this.  Lots of pressure on one race.
The crowded corrals didn’t help. The birth control probably didn’t help either (hormonal changes can affect panic attacks). The large coffee I drank contributed as well I’m sure. It was the perfect storm and unfortunately it hit at the wrong time. But at the end of the day, it happened and I’m moving on. I’m not letting this training go to waste – I will be running another marathon soon. Now that I think I have a better understanding of what happened I hope I can control things a bit better so that it never happens again. Less pressure, more fun. Start at the front of the corral and NEVER run with a pace group (too crowded, too many people jockeying for position). Control what I can and know that no matter what happens, I should be proud.