Let’s just say it’s official – I don’t like to race for “fun.” When people (myself included) say they are racing for “fun” they mean they haven’t trained a lot so they aren’t expecting a PR and they are just going to go out there and “enjoy the day”. I image myself racing for fun by high-fiving spectating children, chatting it up with fellow runners, leisurely enjoying the aid stations and finishing feeling strong and good. This is not realty people. At least not my Type-A competitive reality.

To me, a “fun” race is knowing I prepared, pushing myself to my limits and achieving a personal best because I earned it (ok achieving a PR without training would be nice too but I’m not the type of athlete that can pull this off apparently).  Fun races involve pain, yes, but they are fun to me because I know that that pain is going to get me somewhere. “Pain is temporary, pride is forever” is my motto for a reason.

As I’ve mentioned, I do plan to run AFC every year as long as Mike continues along the path to achieving his goal of racing this half marathon every year for 25 years. I run this race for many reasons and as of late, achieving a PR hasn’t been one of them.  This year I hoped to achieve a different kind of PR – a course PR (standing from the 2011 race). I didn’t plan to achieve this PR as a result of the most recent months of training (or lack thereof), but what I assumed would be accumulated fitness from the last 2 years, particularly the fitness I had when I ran a 1:42 and change at the San Diego Half Marathon in March.  Is that too much to ask? All I had to do was run just less than 10 minutes slower than I did on a similar course with an even larger hill in March.

But no, that didn’t happen. And that’s fine in the sense that as I said, I didn’t train this summer to do well at AFC. However, the disappointment of my failure (25 second failure to be specific) to achieve even a course PR isn’t about Athlinks or the fact that I couldn’t go on Facebook and announce my “course PR” (and confuse people since most probably have no idea what these even means), it was more a sadness about my current state of fitness compared to the state of fitness I was in just a short period of time ago. I worked really, really hard for that half marathon PR and to get myself ready to BQ at Eugene and it’s disappointing to see that not much of that fitness was retained. I need that fitness to get me to a BQ next year and I know I have a long road to not only get back to where I was, but to get even faster than that!

So rather than go into details about every mile and how I was feeling, I’ll give you the high level summary. Asia and I started the race together and lined up in our appropriate corral (this is new this year but not communicated well at all) – however, no one listened to the corrals and although we weren’t even running as fast as the corral we started in, we spent the majority of the first four miles dodging fellow runners. Note to self- start closer to the front next year. Our first mile was close to 9 minutes because it was physically impossible to get around without doing some serious dodging.

We had assumed we wouldn’t stay together in this race since we both had absolutely no idea how fast we actually could run and we hadn’t trained a ton together. We did, however, really want to get a race photo together so we worked for that and ended up with this: 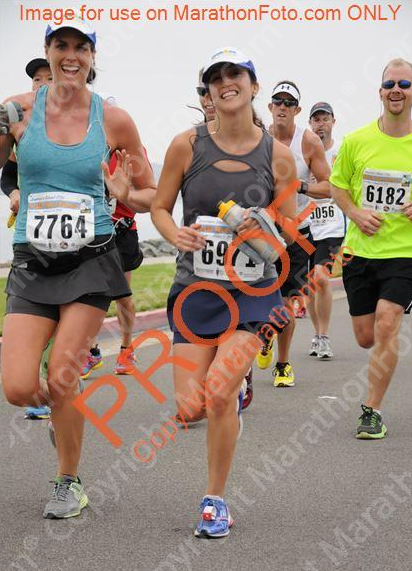 Wouldn’t put that in a frame….

This picture was taken right around the time Asia and I were both pretending like we were having fun “racing” when in actuality we were both struggling to keep up. We both thought the other one was feeling better than us and we both were just trying to keep it together. This photo was taken around mile 6 and 7, which loop around Harbor Island. Unfortunately just as we were leaving the island I said to Asia sarcastically, “Isn’t this fun!?” and she said “No! I don’t know how long I can keep this up” and then we admitted to each other that we both felt like crap and that were probably went out too hard. We both then proceeded to crash and burn as our paces slipped slower and slower and we began to be the passed instead of the passer. 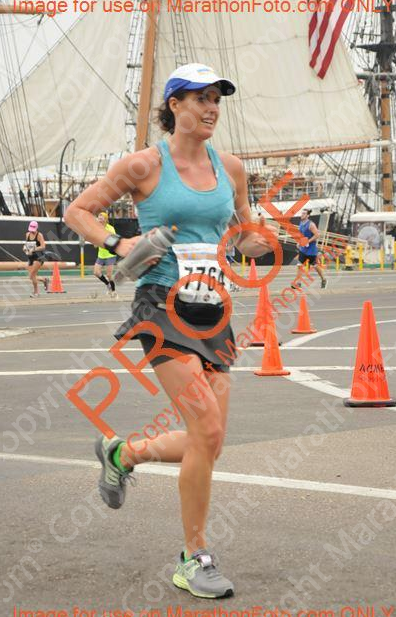 Asia slipped behind me at this point and I kept going, thinking I could at least make my course PR goal of 1:52:25. I threw away my semi goal of a sub 1:50 and just focused on the course PR. However, my pace was slowing and I couldn’t help it. I decided at one point just to wait for Asia if she wasn’t too far behind but when I looked back I didn’t see her. I continued to plod on in misery as I went.

I really focused during this race on NOT looking at my watch. I did look at it, but not nearly as much as in other races. Since I had no idea what my body was capable of, I figured effort was a better guide. Unfortunately I was trying to hang on with what felt like a blazing pace that I felt Asia was setting during the early miles of the race and I burned myself out quickly. Around mile 8 it got hard and around mile 11 it got really, really hard. My pace dropped into the low 9s and I just focused on finishing. Knowing that I had a significant incline to make my way up for the entire duration of mile 12 didn’t help. I even hoped the trolley would pass and I would be “forced” to stop and wait for it.

The hill up 6th avenue at mile 12 was the worst but I think for the first time ever in this race, I didn’t walk at all (I usually use the aid station on the hill as a break). I didn’t walk during this race at all actually because I carried my handheld. At one point a very old man (70s?) passed me going up the hill. That gave me a boost. I didn’t look at my watch but I knew it was bad. I focused on surviving, not dominating it. The highlight of the hill, other than seeing Jeremy and sarcastically screaming at him that I was having so much fun and couldn’t wait to run the race 21 more years, was for some reason this crazy looking cat toy that a man had set up on the side of the course that was dancing it’s butt off. That crazy cat made me smile.

The end was rough but I finished and that is something to be proud of (Official time 1:52:52, 28 seconds shy of my goal). I was disappointed that I couldn’t even pull out the course PR but at the end of the day, I did finish yet another half marathon (my 10th!) and I do have to say I did have fun that morning, even if the majority of the race itself didn’t feel that way. I love races – the excitement before, the spectators during, the finish line party and breakfast after. However, I think I have learned my lesson that I need to at least train enough to be proud of my performance in order for all 13.1 miles to be “fun.”