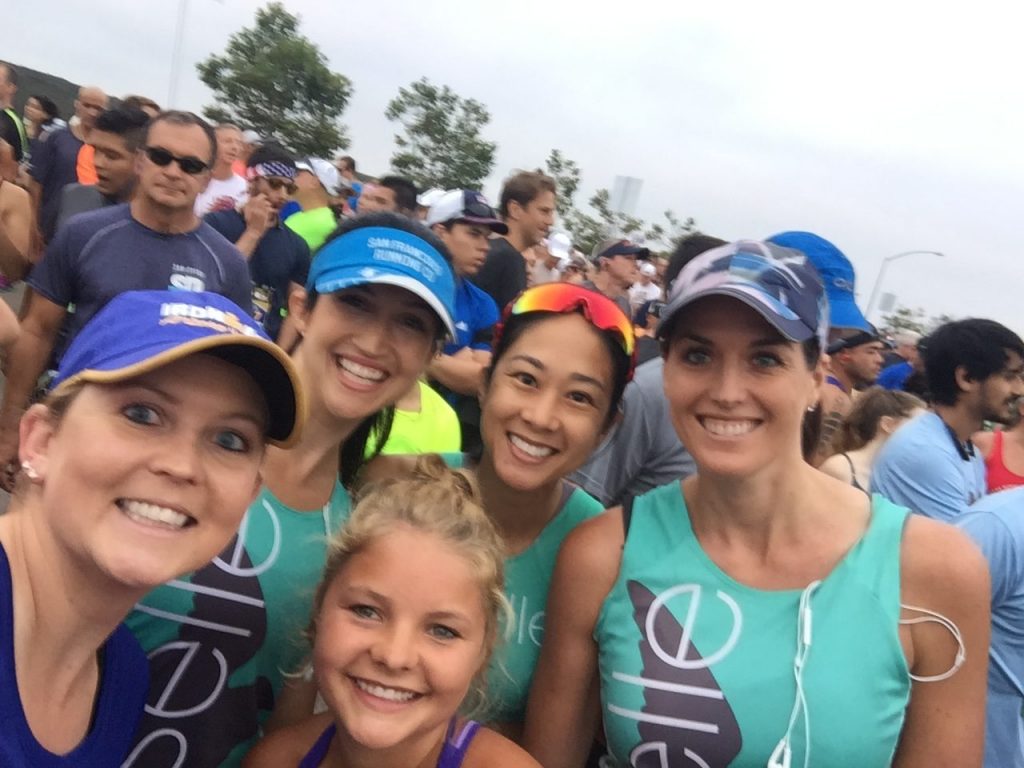 It’s no secret that I love running and that I love craft beer. So when Road Runner Sports contacted me at the end of last year about being an ambassador for the inaugural Craft Classic Half Marathon, a new half marathon in San Diego that finishes at Green Flash Brewery, I jumped on the opportunity. I also organized a Oiselle Team meet-up at the race so that it would be an extra fun race!

My “goal” race for the first half of the year was San Diego Rock n’ Roll so most of my focus when into training for that. I had 6 weeks after the RnR to get a bit more fitness for the Craft Classic and scheduled a tempo run weekly to try to gain some more speed. I had secretly hoped (I really had no idea what I was capable of running) for run sub 1:50 at RnR and came in at 1:54. I thought that maybe Craft Classic would be a second chance at that goal, but as race day approached I started to put that goal aside for a few reasons.

First, the course profile. The race starts with rolling hills and a net decline over the first six miles on the 56 Bike Path but the second half of the race includes a few massive hills (one that they even named and recorded a separate split for). Second, the heat and humidity. It’s July and even though San Diego’s weather is not something to complain about, I think we all know that racing in heat and humidity won’t help anyone. Third, Mike and I had date night on Friday night and accidentally got a bit drunk (I say accidentally because we got a free third round of drinks which we would not have ordered on our own) and I was hungover all day on Saturday (they were IPAs, but yes, 3 drinks is enough for a hangover!). Last, and probably most important, lack of motivation. I had a lot going on during the weeks, and particularly the week, before the race and trying to (post baby) PR at a half marathon in tough conditions wasn’t high on my list of things to worry about. Running fast isn’t my focus right now and I’m ok with that.

On to the race! The expo was held at Road Runner Sports San Diego and Asia, Siena and I went on Saturday for packet pickup. It was incredibly efficient and the swag was really impressive – a cute tank, sunglasses, and a pint glass (plus free race photos and a free craft beer after the race). We were in and out quickly and headed back to Encinitas for sandwiches followed by ice cream at the new Handel’s ice cream in Encinitas (it is the best ice cream I’ve ever had!). 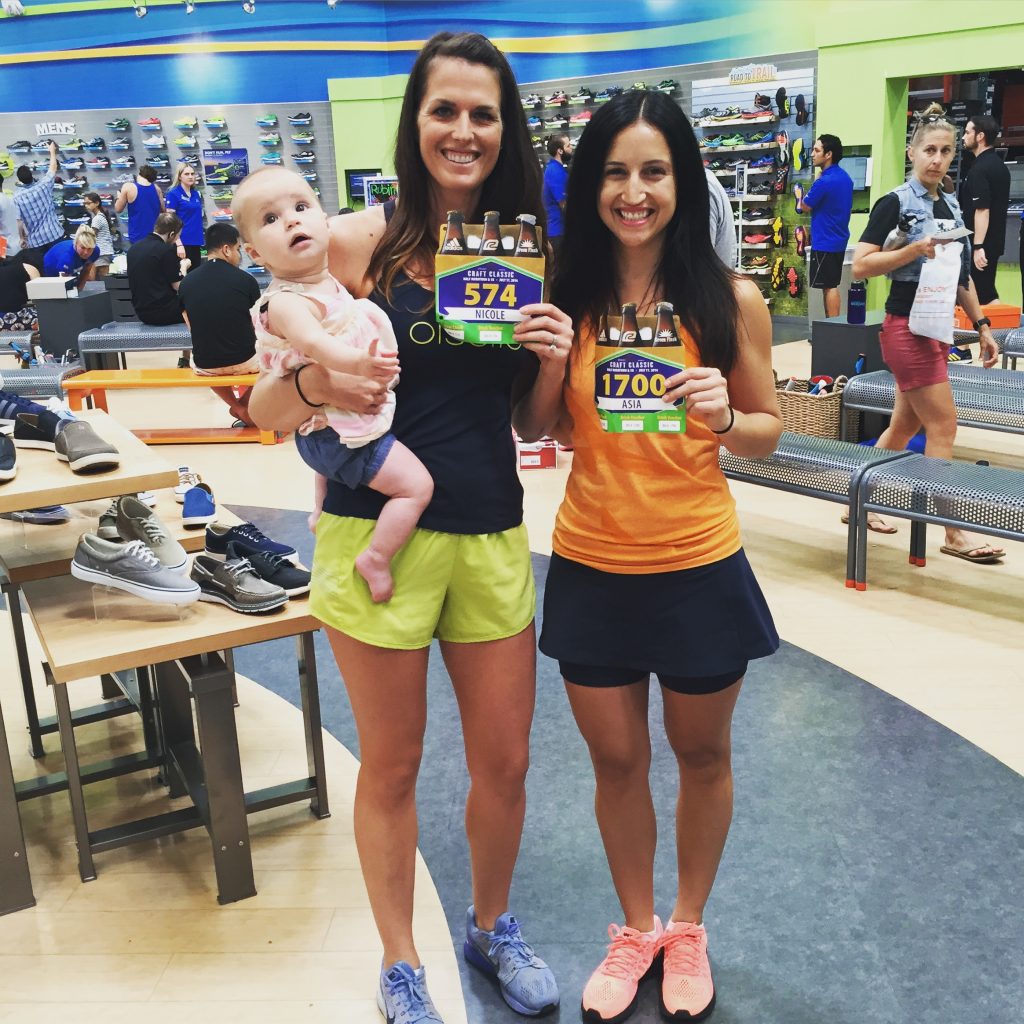 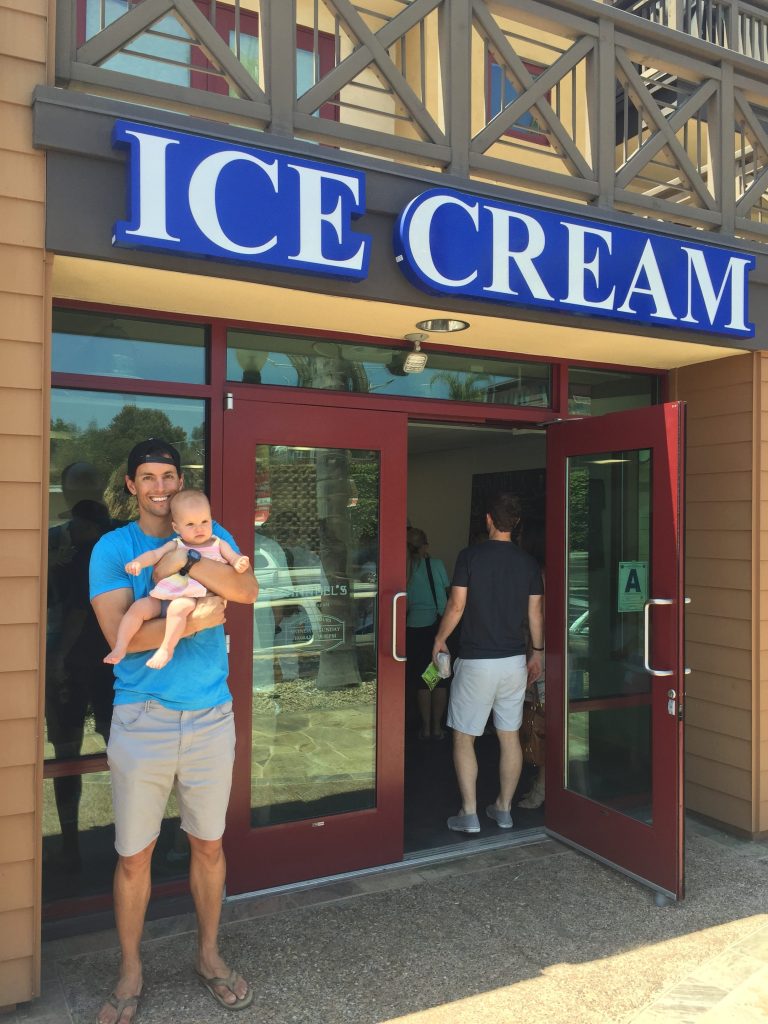 Race morning was an early one due to the fact that the course is point to point and there is no parking at the start line. We had to be in line for the buses by no later than 5 a.m. which meant my alarm went off at 3:30. I slept really poorly the night before and felt like pulling over and taking a nap on the side of the road on the way to the race. BUT once we got there and immediately ran into fellow Oiselle teammate Hayley and then then several other Oiselle teammates along with my good friend Brooke and her friend at the start, I perked up and got excited for a fun morning (for the record, the porto-potty situation was on point with short lines).

The race was pretty small (we were guessing closer to 3,000 based on bib numbers but apparently less than 1,500 finishers) so we seeded ourselves pretty close to the start line, right behind the 1:45 pacer and before the 1:55 pacer. Asia and I planned to run together as long as possible and everyone else planned to do their own thing. I didn’t have a lot of pre-race nerves which is probably a sign that I had already given up on that sub 1:50 goal.

The first 6 miles are on the 56 bike path which has rolling hills but a nice net decline overall. The first mile is almost straight downhill. I was happy with where we placed ourselves because the narrow path wasn’t crowded. My legs immediately felt heavy and my breathing didn’t feel super easy. Our first mile was 8:09 despite the decline (goal pace for sub 1:50 would be 8:23) and I knew then that my goal was probably not happening. I told Asia that and then immediately reminded myself of how I almost always start out the race feeling a little heavy (especially when I do zero warm-up) and that things could turn around. But honestly, I wasn’t feeling super confident that I was going to magically turn thing around.

After a couple miles we were running side by side with a guy running with his 6 month old son in the stroller. We chatted with him for a while and of course, told him how awesome he was doing holding low 8 min/miles on a hilly half marathon course with a stroller! We were pretty impressed. Once we got off the bike path, things got a little harder. We started running down large streets such as El Camino Real. There weren’t many spectators, it was started to get warmer, and we started slowly running on an incline. Our pace slowed and I honestly was just wanting the race to be over! I don’t like feeling like this in a race – I normally love racing, even if it hurts, but in this case, I just wished I was back in bed!

We walked through an aid station which was situated on a hill and then tried to muster up some more motivation. A few female cyclists rode past us and one cheered “Go Oiselle!” which was a bit of a boost. We had taken a Gu at mile 5 but I didn’t feel much of a boost from that. We kept going, our legs heavy, not chatting much. The stroller guy had pulled ahead but we saw him parked on the side of the course around mile 9 changing his son’s diaper. Soon after that, I realized I had to go to the bathroom. Besides when I was pregnant, I haven’t used a portopotty during a race since my first half marathon. I decided not to risk trying to hold it and Asia said she would stop with me since she had to go too. Luckily soon after I felt the need there was an aid station with two portpotties but unfortunately there were a couple people in line. The stop probably took us about 2-3 minutes (that mile was 11:30) and I didn’t really care that much.

Right after that we approached the hill that everyone had been talking about before the race. The race directors did a good job of making the hill seem like a fun challenge by naming it “The Kind of the Mountain” and adding inspirational signs along the course, which actually did help. Asia and I started running up it and then picked a point to walk. We would walk for a bit and then pick a point to run. 95% of the people were walking the hill (I even talked to someone who ran a 1:40 and said people were walking it at that point too!). If you’re familiar, the hill was probably as steep and long as Torrey Pines. Our tactic of picking points to walk or run to really helped make the hill more manageable and dare I say, almost “fun”?

Surprisingly, once we got to the top of the hill around Mile 11, I started feeling pretty good. It was the best I had felt during the entire race. At this point I had decided that I’d finish with Asia (originally the plan was for her to just stay with me as long as she could but we had assumed I’d take off). I started to pick up the pace and encouraged her to keep up. She did for a bit but I could feel her slowing. 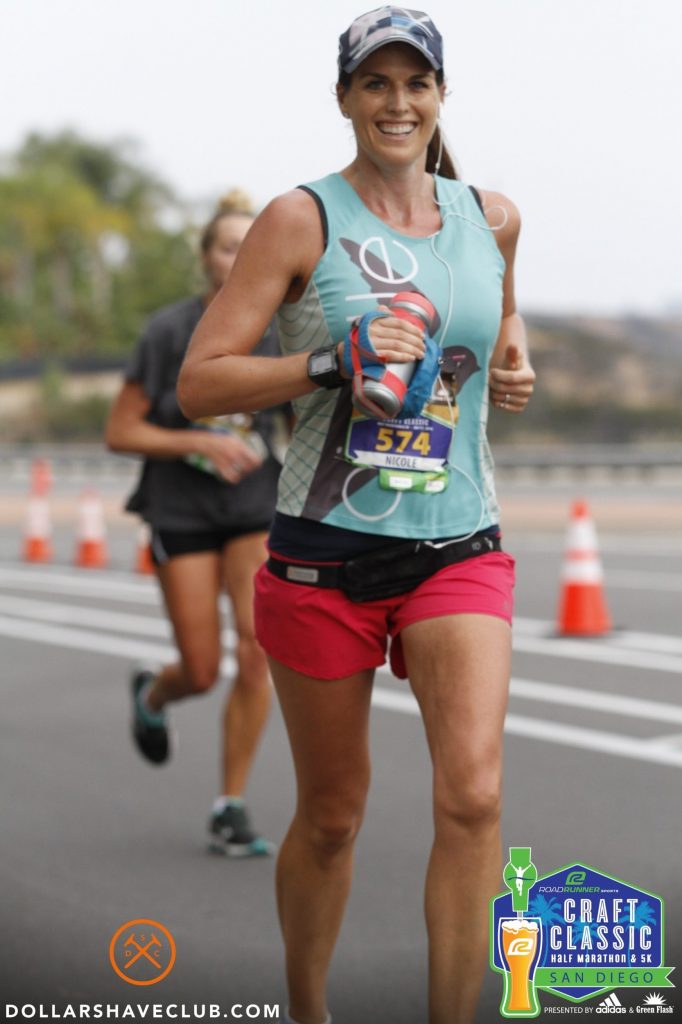 I slowed for a bit but the 2 hour pacer was just ahead of us. I did the math and knew that if we ran 8:50 average miles for the last 2 miles we could make it under 2 hours. It’s hard for me to run a race without giving a good effort at the end. I encouraged Asia again and started running a bit faster. She fell off and waved at me to go ahead so I did. As soon as I left her I passed the guy pushing the stroller who had apparently passed us while we were in the bathroom. 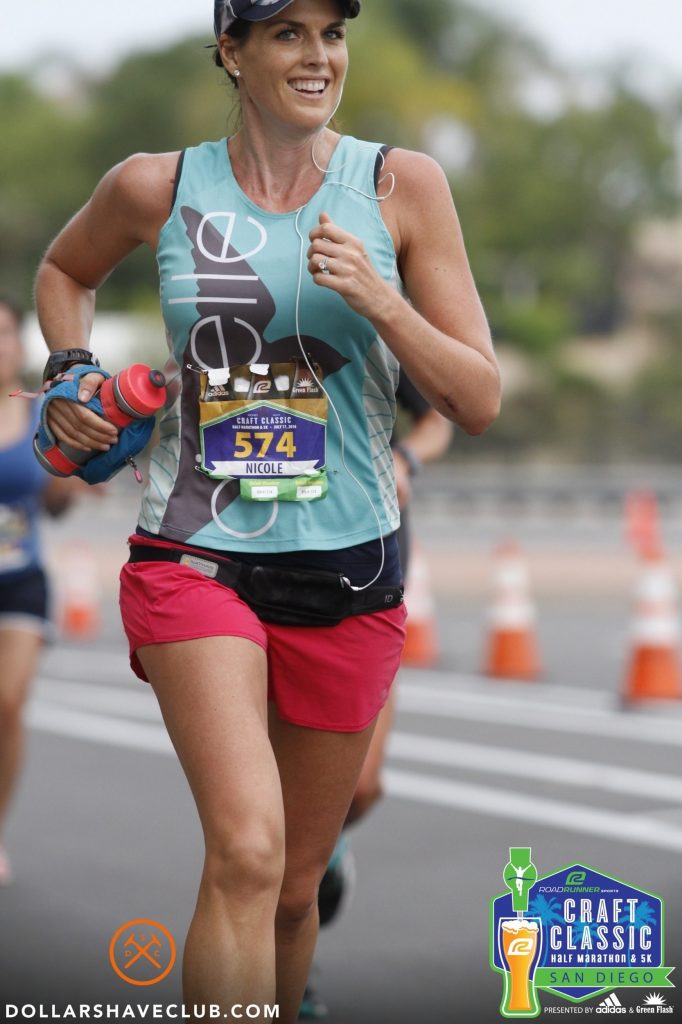 Around mile 12, the course takes a nice turn downward but you can’t see the accompanying upward hill. I was flying down the hill feeling great. I had no clue that this hill was part of the course and was enjoying the break. Unfortunately, the hill of equal grade following the decline loomed ahead, but knowing that I’d have to get up it with only a half mile to go motivated me to push it. As we turned the final corner, another small hill loomed. This course was pretty relentless! I pushed through it, passed the 2 hour pacer and finished in 1:58:30.

The after party was the highlight of the race with either a pint or four tasters of Green Flash for every runner. We met up with Wendy, a Oiselle teammate who ran the 5K, as well as other Oiselle teammates and friends and enjoyed delicious beers and good conversation. We grabbed brunch at one of the food trucks and enjoyed the post-race glow (which in this case, was definitely sweat). 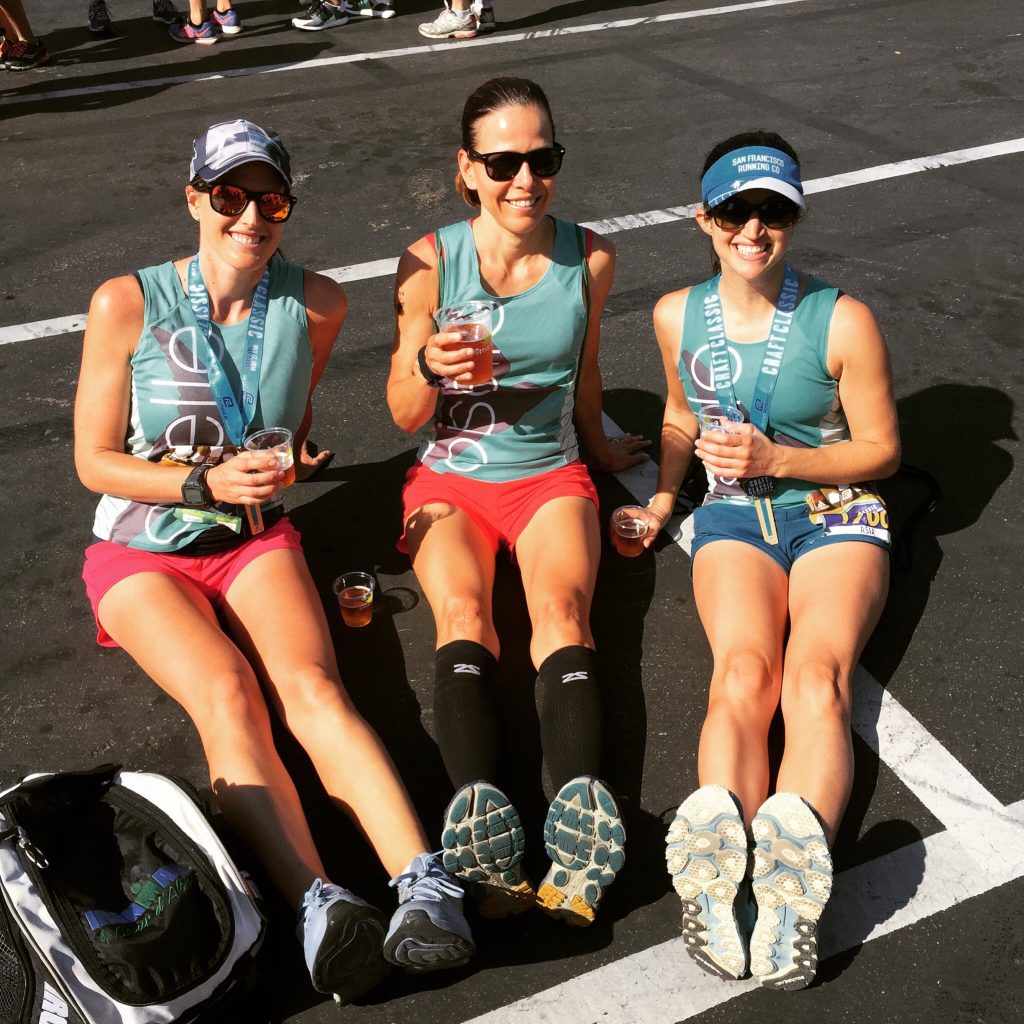 Thanks Road Runner for a great race! Every race has its purpose – in this case, the hills were there so that you really deserved your beer! And I certainly earned AND enjoyed it!

Do you avoid hilly races or embrace them? What’s the best race swag you’ve ever gotten?